Our friend stephen took us to the Borough Market and no suprises, we loved it.  It’s a cross between our Central Market and a very good farmers’market. There were lots of stalls presented by the food maker (all those delicious farmhouse cheeses, game pies, breads, preserves and jams, meats, dairy) and few fruit and veg stalls. A few importers turffles, spices, amazing coffee. And lots of stalls serving food to eat on the spot: curries, paella, roast pig, juices, coffee and general fresh deliciousness.

There’s been a market on the site for a thousand years they reckon. And as it’s on the main road to the first ever bridge over the Thames into London, that would make sense. It’s evolved in the last 200 years to have several sections – a Victorian-era covered market, stalls and buildings tucked under the railways arches, a newish atrium section with a demonstration kitchen and lots of seating, and then even more stalls outside: these ones were cooking and serving lunches to the squillions of people that arrive at lunch time. 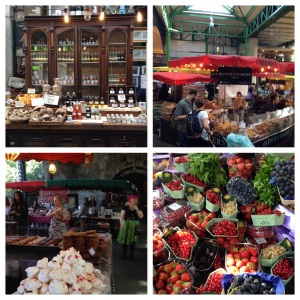 We couldn’t even get into Monmouth Coffee, so wide is its reputation for serving GREAT coffee, but we found a sunny terrace on the Wine Wharf, where we breakfasted and watched traders and tourists, guides and girls guides, school kids and chefs, and cyclists and black cabs squeeze past. Then into the fray. The fungi from France were the draw card of the day but not for tasting; we did enjoy the Piedmontese cheeses washed in Barolo and packed  in the pressings. I nearly wept at the berries – white currants, people,white currants!  And raspberries that we could afford, even with the tragic Australian dollar. The first truffles were there too.

Greenwich is gorgeous. Fabulous architecture (Wren! Jones! Hawksmoor!). Beautiful park, full of Tudor romance and history. The prime meridian of course, and the home of Harrison’s chronometers. And the village has a lovely feel. We’ve ambled through the park and visited the National Maritime Museum, and the Old Royal Naval College.

We found the Vintage Fair by acident and watch marvellous swing dancers swirl and swoop in the shadow of the Cutty Sark. We’ve trained one local barista to make a cortado worthy of our attention, and started our first coffee loyalty card at the exellent cafe at the local art house cinema. Time for some pix. 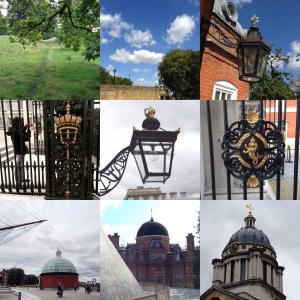 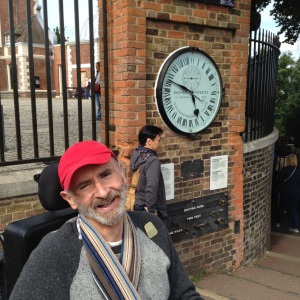 Tim and the 24 hour clock at the observatory

Two out of three ain’t bad

Blackheath Hosp for a blood test. Not signage we are used to seeing!

And music for the days? Mmm. Well, as we are wandering every charted Street, and sailing every reach of the Thames, here’s Britten’s setting of Blake’s poem London, which gets depressing, so just enjoy the music.

Yoicks! Thirty hours to lift off! Lists to make, library books to return, audiobooks to down load. Destination this time is one great city: London.

We’ll start in Greenwich, then cross the river and stay near Regent’s Park. And I want to spend lots of time on the river, or at very least, understanding the river. All suggestions and inspirations welcome.

It would be too easy to start our play list with The Clash “London Calling”.  But I think I’ll play THIS on my iPod when we land.

See you all in the UK.

Things we ate along the way and loved 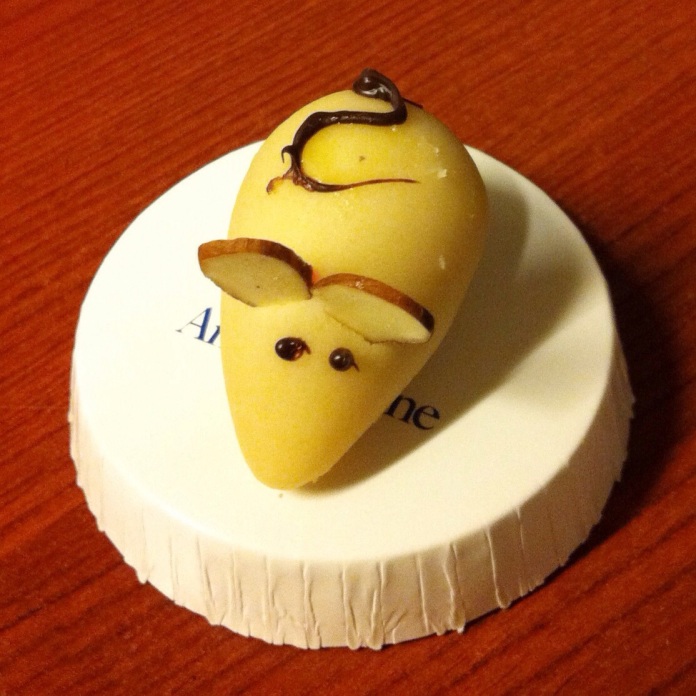 When I saw it on a map, I rather imagined Mediterranean-style above ground mausoleums-in-marble-of-every-hue.

It is the opposite – 256 vaults of marble are below ground, and the lawned block above is has very few memorials. Each vault is own by a family, and is marked by a square ‘lid’ of marble with the vault number engraved upon it.

It was New York’s second non-sectarian cemetery, founded in 1831. And no one knows how many people are interred here – a disgruntled employee apparently burned all the records in the 1850s. The famous people are known: James Roosevelt has been buried there twice, President James Munro was in his son-in-law’s vault for a long time, and there’s a vault containing the mortal remains of the well-known merchant with the glorious name of Preserved Fish.

It is still used, but rarely, as many families have ‘forgotten’ or lost track of their vault – few have changed hands since 1850.

It is beautiful, peaceful, and though seldom open, it’s one of those special green places that give the neighbourhood a feeling of space.

You know I love history. And stories. And old buildings.

When I heard there was a naval yard from the Revolution still operating in New York City, I was on to it.

Turns out the history of the Brooklyn Navy Yard is pretty revolutionary. For a start, it’s tucked into a bay that you almost don’t notice, where Walloon settlers first landed in the 17th century. And it used to have an island. And a major hospital for naval veterans. And it’s where Sweet n Low is packaged and where both Flight of the Conchords AND Boardwalk Empire are filmed! 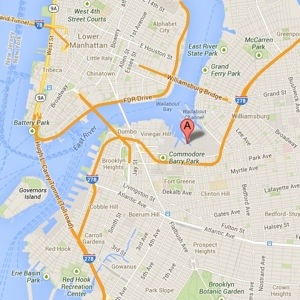 Yes, I’m talking about that A in the grey area that’s 500 acres in Brooklyn. 500 acres looking at Manhattan.

We found Turnstile Tours had a Tim-friendly bus AND great access to the site, so we spent the afternoon with Cindy, Doug, John and Roger, exploring the site and hearing these great stories.

Don’t worry – I’m not going to relate every one! The Navy Yard’s fantastic museum at Building 92 can do that better than I can.

So there are still six dry docks here, the oldest from the revolutionary war. They are used today for ship repairs: ship building per se ended in the 60s. During the Second World War, 75 000 people worked here over three eight hour shifts. That’s 25 000 people clocking on as another 25 000 clock off. The streets near around the yard teemed, yes teemed, with life, servicing the yard, feeding the workers, outfitting the sailors.

Benny and Betty Eisenstadt had a cafeteria nearby that operated round the clock until the ship building wound down after the war. With business dwindling, Benny looked for a new thing, and bought a tea bag making machine. Betty had always thought sugar bowls in the cafeteria highly unsanitary and suggested he package sugar instead. Yep, now you know who to thank/curse when you use/fidget with those packets. Well, Benny went on to package single serves of ketchup, soy sauce, jam, you name it, it’s his fault. But in 1957 he and his son Martin came up with Sweet n Low, and made millions. The packaging business has operated from within in the Navy Yard since the early 60s, when the yard closed.

So the revolutionary future? It’s having a pretty vibrant regeneration and is becoming home to a range of businesses and services. The Eisenstadts have been there for ages. Their neighbour, Kings County Distillery is, it turns out, the oldest distillery in New York State, having been founded three years ago. Yep, 2010. Those pesky prohibition laws about making stuff were still in place until then! The distillery tour and tasting is hilarious – even if you don’t drink bourbon.

Other businesses that have moved in, renovating great buildings, and recycling these amazing spaces include a company making solar powered street lights, and Steiner Studios.

On the roof of a really big six-storey building is an enormous vegetable garden that’s part of the Brooklyn Grange Farm network. And we spied beehives on the roof of another building. 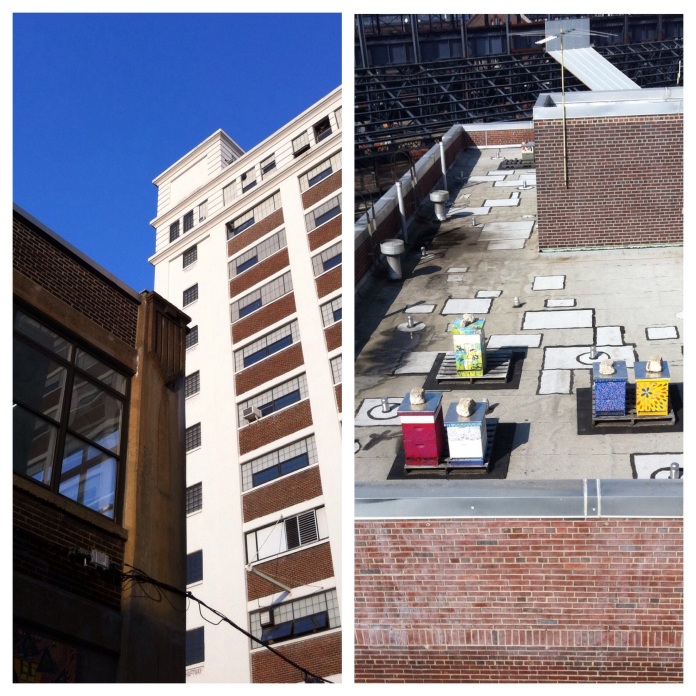 And the island? Here it is in the late 19the century – it was dredged away as the ships being built got bigger and bigger.

And our soundtrack? It has to be the opening number from On The Town – not only my All Time Favourite Musical, but if you look carefully you’ll see it’s set in this very naval yard. Which I hadn’t realised ’til right now. Coincidence? Serendipity?

“We’re off to New York”, we cry, but we really mean Manhattan, that long, treasure-laden island with the most recognisable skyline in the world.

We know about Central Park, Greenwich Village, Empire State and Chrysler Buildings, and myriad other places from movies, news, song, all sorts of sources.

To some of us, it’s the Emerald City; to others the heart of the Evil Empire.

But Brooklyn. We know the name, and maybe that it’s east and south of Manhattan, probably because that beautiful bridge points in that direction. It’s takes up a lot of Long Island (which it shares with Queens) and has even more neighbourhoods than Manhattan. It has the second largest arts museum in the US, a 500acre park designed by those democratic landscapers Vaux and Olmstead, the famous boardwalks and amusements of Coney Island, and is the setting for most things by Neil Simon.

Time for a map: 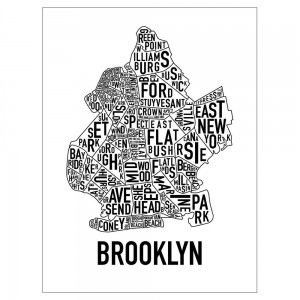 Now see those squished place names between Williamsburg and Sunset Park. That’s our bit. It felt enormous as we hoofed about for five days. But now I know I can’t say “Oh Brooklyn, it’s fab” because I’ve only explored one tiny little pocket, in a pocket of the wallet of the courier bag of the set of luggage that holds this borough.

Anyway, as everyone knows, there’s only one way to learn NYC geography, and that’s to listen to Ella sing about it.